Fleet management for the intervertebral disc 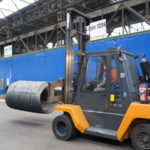 It is well known that a fleet management system for forklifts can lead to significant cost savings. But
the “Technical Logistics” editorial team at Saarstahl AG in Burbach has now been able to find out
what impact such a system has on the condition of the intervertebral discs.

Gernot Schmidt is operations manager in the adjustment department of the Burbach plant. This Saarstahl AG rolling mill manufactures wires from 4.75 to 20 millimeters in diameter. Of the more than one million tons of wires per 500,000 coils, a quarter goes to the tire industry, which appreciates the high quality of the material and has therefore given them several awards. The dressing shop takes over the finished wires from the rolling and takes care of all necessary steps until shipping by truck and above all by train, which transports more than three-quarters of the finished wires from the Burbach plant.

Twelve so-called coil lift trucks are available for the dressing shop, mainly from Linde and Still. A total of 17 vehicles are equipped with the manufacturer-independent fleet management system “Mobile Easykey” in Burbach. The “Mobile Easykey” modules of the “modular” product line are used, with Wi-Fi data transmission and the crash sensor remote.

In recent years there have been several serious accidents, particularly with the coil lift trucks, named after the up to three-meter-long mandrels, with which the finished wire coils are picked upthankfully mostly without personal injuries.
However, the costs incurred were considerable. To reduce these costs of impact damage, Gernot Schmidt began searching for a driver assistance system in 2015. The primary aim was to avoid collisions between the forklifts. The systems of the forklift manufacturers, for example, were eliminated immediately due to the lack of compatibility with one another.

In particular, the non-standardized processes in operation, the extremely different conditions in the halls and outdoor areas place high demands on the drivers and also on the corresponding driver assistance systems at Saarstahl in Burbach. None of the systems were considered at the time.

Security for employees and data

Whether fleet management or driver assistance system, data protection is very important at Saarstahl. As a result, all systems that store data in the cloud were also discarded. In addition to storing the data on customer-owned servers and the data protection-friendly presets of the software, the “Crash Sensor” was one of the main arguments that eventually led to the choice of “Mobile Easykey”.

In the test phase 2017, three forklifts were initially equipped and the crash sensor of the different forklifts “learned”: The demanding floor conditions indoors and outdoors as well as the laid tracks required some learning trips until the optimal crash profile was applied for each type of forklift.

Since the introduction of “Mobile Easykey” and crash sensors two years ago, there has been no serious accident. Drivers are sensitized and drive more cautiously. Nobody wants to ask the manager to unlock the forklift after a crash. There is a lot of rumbling, when the forklifts with their average two tons heavy wire coils drive over railway tracks. This can trigger a crash-alarm. To avoid this, drivers now throttle the speed in the appropriate places. And thus “Mobile Easykey” also has a positive effect on the intervertebral discs of the employees. It also avoids premature material fatigue on the forklifts and thus increases their service life.

Currently, there are an average of ten crash alarms per month – with 13 shifts a week and about 100 different drivers a small number. The procedure at Saarstahl provides for a shutdown after 20 seconds to remove a forklift from a possible danger zone. The employee must then inform the foreman or master and document the accident or the reason for triggering the crash alarm and have the forklift unlocked again. The activation is then sent by e-mail to the manager and the two masters.

If there is an accumulation of alarms, these reports can result in discussions with the drivers concerned or the removal of uneven floors or other triggering factors.
For the future, a test with cranes is planned at the Völklingen plant in order to identify broken rails using the „Mobile Easykey “¬ crash sensor. Also in preparation is the load analysis with the tools of the “Mobile Easykey” software to optimise the number of forklifts.

The introduction of “Mobile Easykey” was initially critically eyed by the employees. The drivers felt being controlled,” says Gernot Schmidt.After the works council had examined and approved the system, the individual presets for Saarstahl were made. Today, for example, all personal data in the software is deleted after 72 hours. The permissions in the software (“Who is allowed to see what?”) have been assigned according to strict criteria. In addition to Gernot Schmidt, masters, operations managers, and maintenance personnel have access to the system with different permissions. The works council was able to convince the drivers at the time that no performance control will be carried out with “Mobile Easykey”.

Since the introduction of “Mobile Easykey” and crash sensors two years ago, there has been no serious accident. Drivers are sensitized and drive more cautiously.

A total of 17 vehicles are equipped with the manufacturer-independent fleet management system “Mobile Easykey” in Burbach. The “Mobile Easykey”-modules of the “modular” product line are used, with Wi-Fi data transmission and the Crash-Sensor-Remote.

Your Message to our Sales Team 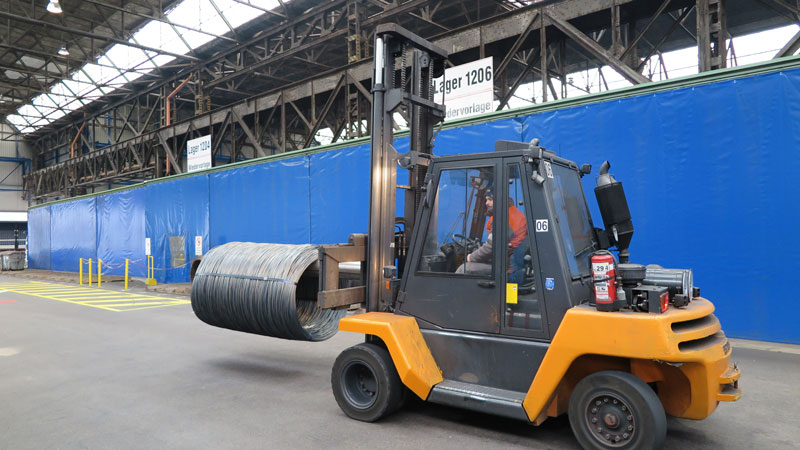